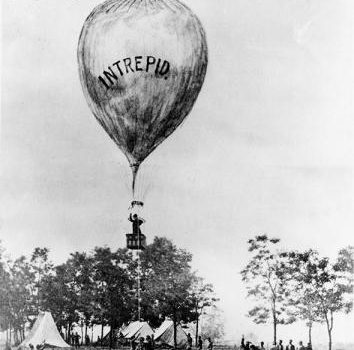 On April 19, 1861, Thaddeus Lowe launched his small balloon the Enterprise from a vacant lot in the heart of Cincinnati. Lowe’s ambitious plan was to fly 500 miles due east and to land in Washington. Lowe was hoping to offer his services to the Union cause, and outflank rival aero­nauts who hoped to do the same. Lowe met a rebel breeze, and ended up touching down after 650 miles near Kelton (Union County) in the heart of the seceded state of South Carolina the next day. Locals believed he was a spy, but Lowe was not yet part of any war effort. After being taken prisoner, Lowe was released after several people vouched for him being a scientist.